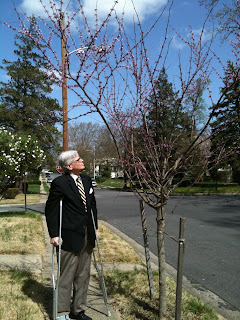 Memorial Episcopal Church publishes a series of Lenten meditations by members of the parish. I was invited to contribute this year but, distracted and preoccupied by other matters, missed the deadline. Now, to stop ruminations from rolling around in my head, I offer them to you.

In Lent we are invited, encouraged, and exhorted to engage in self-examination, which is a healthy enough thing to do, but which can easily lead us astray.

In introspection we may wind up dwelling on the pains of the past: the injuries we have done to others, the wounds we have suffered that still ache, the actions we have failed to take, and the defects of our character that stubbornly persist throughout our lifetimes. Introspection can mire us, and the more we reflect on our failures, our hurts, and our limitations, the less we may be able to extricate ourselves, the more we may feel powerless.

For many people, the main action in Lent is to give something up: red meat, liquor, desserts, caffeine, cigars, whatnot. How about, instead, giving up something from the past that is beyond remedy? Those love letters from a failed romance? Recycle them into pulp. The same with that letter of rejection for a job you sought. Mark something over and done with in your mind, and rid yourself of the physical manifestation.

Another action is to make something right. Make an apology to that person you injured. You may not be forgiven. Or give up on the resentment of someone who injured you.

Cast your mind on what you might yet do instead of what you have done or failed to do. As Paul Writes to the Philippians, "forgetting what is behind me, and reaching out for that which lies ahead, I press towards the goal."

Some of this might be good for us corporately as well. As much as we honor our history and our identity as a denomination, a diocese, or a parish, it is better to live in the present and press toward the future than to live in the past. Reflecting too much on our past glories that have faded, or focusing on past failures and resentments, will not get us where we wish to go.
Posted by John McIntyre at 2:29 PM 3 comments:

An explanation for Mr. Morrow

Both Clark Elder Morrow and Robert Hartwell Fiske have objected to my comments on Mr. Morrow’s writing about the Oxford English Dictionary, complaining that I have failed to give Mr. Morrow’s texts full consideration. I had endeavored to spare you, my readers, such an examination, but the worthy gentlemen are entitled to get what they have asked for.
Therefore I will go over Mr. Morrow’s original article on the OED’s “slide into stark irrelevancy,” demonstrating in some detail that it is a tissue of inanities wrapped in rodomontade.

A major deficiency comes to the fore immediately as Mr. Morrow goes on about the “once-august and once-respected tsar of all dictionaries” having including the heart symbol under the entry for love. There is much huffing and puffing,* and what you may take for ponderous waggery, about how this will help to “precipitate the Apocalypse of St. John.”

Actually, as the linguist Dennis Baron patiently pointed out, the OED has not included the heart symbol; neither has it listed such a meaning in the love entry. It has added to the entry on heart as a verb, indicating that that sense is sometimes represented by the symbol. Given Mr. Morrow’s windbaggery about precision of meaning, one might have expected better of him, and of Mr. Fiske for reproducing this error in his Dictionary of Unendurable English.

Putting that bone aside, Mr. Morrow proceeds to chew on some initialisms: “LOL and OMG are included now, of course, Not words, you say? Doesn’t matter. Any burp, any eructation, any sound-producing escape of noxious fumes from a human being. …” Say, you don’t mind, do you, if I begin to abbreviate some of the repetitive blowhard rhetoric, do you? Professor Baron points out that the inclusion of initialisms in dictionaries is not a novelty. And unless Mr. Morrow uses ante meridiem and post meridiem instead of a.m. and p.m. with times, he should know this.

He also deplores the inclusion of phrases, such as tinfoil-hat-wearing (and I will not speculate on why that particular one is a burr under his saddle). I wish that he had expanded on this (not a wish I frequently voiced while reading the article), because all of the dictionaries I’m familiar with include phrases.

There is some extended carrying-on about slang and ephemeral phrases. I’ll move to the punch line: “Does the OED really want to produce a fifty-volume set (and it will be fifty volumes if it continues in its mad lust for passing verbal hiccups), the vast majority of whose terms will have to be marked Obs. In a relatively brief time?” I begin to wonder how much time, if any, Mr. Morrow himself has spent in these sacred precincts. The OED is a dictionary on historical principles, beginning each entry with the oldest meaning to be found. Virtually every page has an entry with some archaic and obsolete meaning.

Let me skip to the peroration: “The inclusion of a heart symbol [not actually there, remember?] in the OED renders the entire enterprise suspect, in my view, and wassup and LOL nestling in its pages mean that I will return (for all my lexical explanations) to the 1913 edition of Noah Webster’s masterpiece.”

Now all begins clear. After all this tick-tocking between tosh and bosh, we see the point. Mr. Morrow dislikes not only the language of the twenty-first century, but also that of the twentieth. And the Oxford lexicographers have had the temerity to include in a dictionary words that he does not like, without consulting him. This galls him.

The point of a dictionary is to provide meanings for terms, and I expect that many current readers and writers appreciate a resource that sets out to explain the meaning of language they encounter that is unfamiliar. Not to speak of how much future readers and writers may need it to understand the writings of this age.

But for Mr. Morrow, that is not the point. The point is that a dictionary should exercise Authority, should pass judgment on what words are acceptable for the language, showing arrivistes to the door. As I concluded previously, he complains about the OED for not doing what it does not set out to do.
I suggested originally that Mr. Morrow might be a coxcomb. Here’s a meaning from Dr. Johnson’s dictionary: “a superficial pretender to knowledge or accomplishments.” I leave it to you, gentle reader, to judge my surmise.

*Viz., “So it is now undeniable that there is no phrase, no adjectival compound, no tattoo symbol, no random smudge on a page or a pair of pants anywhere in the world, that the editors of the OED will not enshrine in its pages—electronic and otherwise. It does not matter how far the term in question may lay [oh, sic] from mainstream usage—it doesn’t matter how completely unheard-of the word or mark or scrawl may be—it does not matter how asinine or silly or childish or contemptible the pictogram or smear may be—it matters only that some sort of consensus emerges among the geeky gurus of the OED as to its inclusion, and the mark or scratching or happy face is hallowed forever in some corner of the estimable tome.”

Mind you, the OED, however estimable, is neither a shrine nor a hallowed place nor a repository of sacred scripture, but a dictionary, a place to which people resort to find the meanings of words they do not know. And, of course, I have to remind you, the odious symbol that gave rise to this chivvying is not actually included.