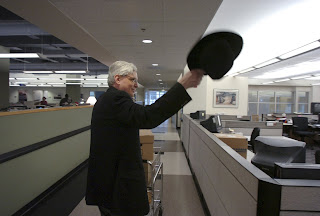 My fellow bloggers Androcass, John Gordon Ross, and Wishydig have all posted kind comments during this week’s upheaval as I departed abruptly from The Baltimore Sun and set up shop at this location. Mr. Ross commented that “his affability, intelligence, humour and tolerance of other viewpoints made that blog exemplary.”* The interesting thing, to my mind, is that I have disagreed with these gentlemen, sometimes sharply.

These aren’t isolated cases. One of my best students from my time as a teaching assistant at Syracuse, Alexander Ackley Recouso, writes for an Internet journal, The Reactionary. The political views he holds aren’t much of a match for the old-line McGovern Democrat who was once his teacher, but we have been in friendly contact for thirty years. I’m proud of him. He has a strong point of view, which he expresses vigorously.

The thing that makes a secular, liberal democracy practicable — and tolerable — is willingness to respect contrary religious, political, and aesthetic views, and to discuss differences in those views with civility. The lack of that respect and civility is what makes the Olberman/O’Reilly bellowing, to take a representative specimen, so tedious and unrewarding. Or to take another, the childish name-calling and abuse that frequently masquerades as discussion on the Internet.

As we proceed on this blog, we will operate on the same principles as in the previous one. If you disagree with anything here, please say so. I do not fear criticism, and I welcome correction. I won’t approve comments that are personal attacks on other people, but you are welcome to attack positions and ideas as vigorously as you like. Also, no one will be faulted for typographical errors or minor lapses in grammar or usage; you shouldn’t be shy about writing.

Before we proceed with further posts, I want to thank many people for many kindnesses during a difficult time. Monty Cook, my editor, to whom fell the duty of discharging me, did so with tact and consideration, and visible reluctance. The many expressions of affection and regard from my former colleagues at The Sun, even as they confronted their own difficulties, were deeply moving. And the comments from my readers, on the old blog and here, many from people who had never posted a comment before, gave me to understand that my work over the years has not been in vain.

So, as we move on, with a photo that Jerry Jackson took as I carted my belongings out of the old building on Calvert Street, I salute you all.


*Don’t think, Mr. Ross, that I failed to notice that all the links in your post were to Wikipedia. Harumph.

**I, too, was a manager, and I understand that when you take the King’s shilling, you have to be prepared to perform disagreeable tasks.