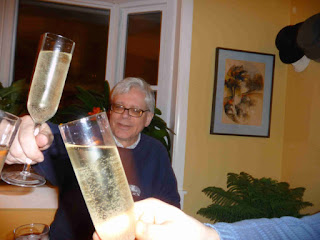 Amid the storm, a family dinner last Wednesday evening to celebrate my fifty-ninth birthday. (I am wearing my Baltimore Sun Blizzard of' '93 commemorative sweat shirt from a preprandial bout of shoveling.) 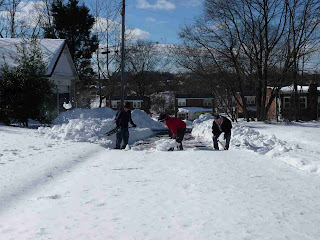 The young gentlemen from Trinity Episcopal, Towson, whose youthful musculature, assisted by the decrepitude of several elders, cleared half of Roselawn on Sunday afternoon, from the garage in the background to the intersection with Plymouth Road. (Note the flung clump of snow, upper left.)
Posted by John McIntyre at 5:07 PM 7 comments:

George Washington’s birthday is actually February 22, but federal law makes the holiday the third Monday in February. For the first few years of his life, Washington marked birthday was February 11, because in 1732 Britain had not yet adopted the popish Gregorian calendar.

Since the intention of the holiday is to honor the presidency and all presidents, President’s Day looks like a bad choice. You can choose between Presidents Day, which the Associated Press Stylebook prefers, for what that’s worth, or Presidents’ Day.

Today is also Snow day 11 in my reckoning of the Baltimore Nopocalypse, and I can report with pleasure that mobility has been restored at 5516 Plymouth.

Yesterday Kathleen recruited three teenage youths from Trinity Church to help clear Roselawn from our garage to the intersection with Plymouth Road.

J.P. had been out in the morning, making calculations. He measured the distance from the garage to Plymouth Road, the width of our Malibu, and the depth of the snow. He filled a cardboard box with a cubic foot of snow and weighed it — eleven pounds. His determination was that we would have to shift 18,000 pounds of snow, nine tons, to clear the street, and I am in no position to challenge the mathematics of a St. John’s College graduate.

Fortunately, no one had told the three teenagers that the task was impossible, and they went to work with a will. Kathleen, J.P. and I picked up our shovels and were joined by two neighbors, Robin and Harry. In a little over two hours, the eight of us had cleared one lane of the street down to pavement.

Maneuvering the Malibu out of the garage for the first time in nine days, I drove Kathleen and J.P. to the Hamilton Tavern for a celebratory dinner. Try the jalapeno-cheese fritters.
Posted by John McIntyre at 8:14 AM 1 comment: