You weren't just misled, you were had

There are two stages in becoming a writer. First comes the learning. Then comes the unlearning.

I spent years coming up through the ranks as an editor mastering grammar and usage, conventions and arcane style rules. Reading and encounters with fellow editors enlarged my understanding to recognize that my colleagues and I had wasted considerable time on mistaken or outdated strictures.

For the past couple of decades I have been campaigning against shibboleths and superstitions, even having modest success in getting editors of the Associated Press Stylebook to scrape some of the barnacles off its hull.

It’s not just schoolrooms and stylebooks tendering nonsense to the impressionable. Look at the internet. Pick a random post advising against using the passive voice and you are apt to encounter appalling ignorance—people who can’t tell the difference between the passive and the intransitive, or who simply say never to use any form of to be.

Readers of my blog posts started sending links about writing in general as well as grammar and usage, and there was another realm of unsound admonitions to discover with a wild surmise, like some watcher of the skies when a new planet swims into his ken.

Emboldened by the success of The Old Editor Says: Maxims for Writing and Editing, which since its publication seven years ago has sold dozens of copies, I set out to expose arrant nonsense, oversimplification, and crackpot edicts.

The result, Bad Advice: The Most Unreliable Counsel Available on Grammar, Usage, and Writing, is being published May 1 by Apprentice House at Loyola University Maryland.

It will be available for a modest sum at Amazon.com and Barnesandnoble.com in both print and online versions. 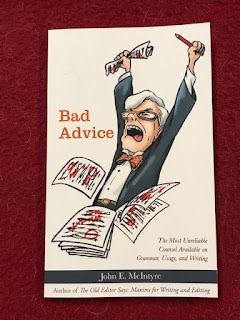